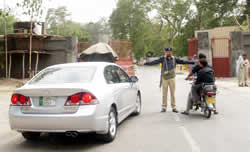 LAHORE: The Government Officers Residence (GOR-I) has become an ‘empire’ for District Management Group (DMG) officers with some 75 percent bungalows in the residential area allotted to DMG officers.

The colony is located in a prime area of the city, adjacent to The Mall, the Canal, Jail Road and the Aiwan-e-Tijarat.

Of the total of 161 bungalows in the locality, 113 are available for open allotment. Of these, only 27 have been allotted to officers who are not from the DMG.

Out of the 161 bungalows, 25 are at the disposal of the Lahore High Court (LHC) for allotment to LHC and Supreme Court judges. Fifteen bungalows are reserved for the chief minister and other provincial legislators, and eight are designated for officers of various departments.

One house has been allotted to an employee of the Punjab Assembly, one technical officer (chief pilot), two educationists, four professors of medicine, one BS-21 officer of the Information cadre, one former PSS officer, and six PCS officers.

Only seven officers of provincial cadres (ex-PCS, PSS) have been provided accommodation in GOR-I, and only six houses have been allotted to BS-21 officers of both cadres. Five Police Service of Pakistan (PSP) officers are also residing in GOR-I. The remaining 86 residences are occupied by DMG officers.

Of these 86 officers, the majority are posted in Punjab on key administrative slots, while two are posted outside the province. As many as 12 retired police and DMG officers also live in the residential colony in violation of the Policy Governing Allotment of Government Residences issued by the Services and General Administration Department, the sources said. These officers are working on contract after retirement, they said.

Punjab Chief Secretary Javed Mehmood has two houses allotted to him. 9-Aikman Road is the official Chief Secretary House, while 2-Shanan Road is also allotted to him. Sources said 2-Shanan Road was originally declared the CM’s Guest House during the tenure of Ghulam Haider Wain. Mehmood took over the residence in 1996. Sources also said the house was being renovated from the ministers’ quota, because ministers are allowed renovation and alteration upto Rs 1 million.

This entry was posted in Politicians, Uncategorized, Urban and tagged DMG, GOR, security. Bookmark the permalink.