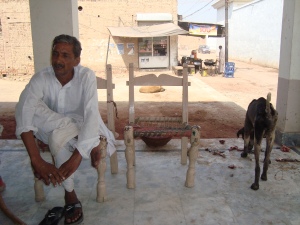 There are many practices in our society which are religious and have their origin in Hinduism. The Mazaar culture and the aura of the saint, his miracles, and other features of his life, represent a closer Hindu connection. One such mazaar is the tomb of Peer Abbas, situated in the heart of the Pattoki town. This is a huge building which is now under the Auqaf department. Completed recently with the help of magnanimous devotees, the edifice attracts people from all over Punjab.

Peer Abbas is also famous as Peer Abbas Kutteyanwala, which means one who has dogs. During his lifetime, the Saint kept company of dogs who followed him everywhere he went. It is said that whatever Peer Abbas was given to eat, he used to hand it over to the dogs. His nephew, Jafar Kazmi says, his uncle had named all his dogs but those names weren’t conventional; they were derived from government offices, specially associated with the Department of Police. SP, AC, Commissioner, Havaldar, Inspector, Judge.

However, he could not tell, if there was any hierarchy within the dogs, if SP had greater significance than Havaldar. Such naming of the dogs, begun by Peer Abbas, ended with his death. Today, 40 years after the death of the Saint there are still dozens of dogs at the tomb. All of these dogs have a coronal around their neck, which sets them apart as the dog of Peer Abbas. No one chases away these dogs; neither does anyone refuse them anything. 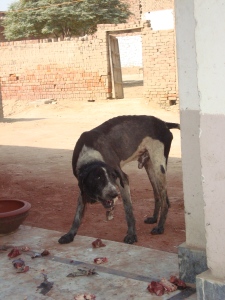 Once Peer Abbas saw a bitch with puppies, feeding them in heavy rain. The Peer got a shelter built for the bitch. As a result of this act, the bitch became his loyal follower and along with her puppies started following him around. Peer Abbas embraced them. This is how Peer Abbas became Peer Abbas Kutteyanwala. The dogs of the Saint, living around the sanctuary today are descendants of that bitch.

After the death of Peer Abbas, it is said that a boy who belonged to the nearby village of Wan Radha Ram fell sick and was told to serve the dogs of Peer Abbas. Miraculously, the boy showed improvement, until he fully recuperated. After he returned home he once again stared showing signs of deterioration. At the same time, the brother of Peer Abbas, Syed Abid Hussain, also the Gaddi Nashin, had a dream in which he saw Peer Abbas asking him to bring back the boy, as he had been chosen to serve his dogs. When he reached Wan Radha Ram to bring back the boy, he found out that the boy and his parents were already inclined to do so themselves. So this boy came to the tomb and devoted the rest of his life for the service of dogs.

For the last 20 years Nawaz Dogar has been living with the family of Peer Abbas. He is passionate about the dogs. Locals, in order to take blessings of the Saint, bring bags full of milk and meat. The dogs of the Peer don’t have to work at all to gather food. They just have to be present around the tomb to get it. Because of this easy access to food and continuous protection, the dogs have become extremely lazy. They eat and sleep all day. Last year, a group of powerful puritanical devotees of the saint complained to the family of Peer Abbas that the presence of dogs, inside the tomb, defiles his grave, which is why they should not be allowed to enter the sanctuary. So reluctantly, the family had to prohibit the entry of the dogs into the tomb. During the time, when the dogs were allowed to roam around freely inside the tomb, there was almost always a presence of around 30 dogs. Since then a few of them have moved away and come back occasionally.

Nawaz Dogar, a local, claims that during the three-day urs celebrations of the Saint on Sep 4, 5 and 6, the saint dogs do not eat despite plenty of food placed in front of them. They don’t show any such refrain on other days. The dogs that died during the lifetime of Peer Abbas were buried in the graveyard next to mausoleum of Baba Jan Muhammad, near Adda Ghaziabad, Chichawatni.

This tomb is a Pakistani version of Karni Mata temple in Rajasthan, India. This is the famous temple of rats, whose documentary has been played several times on National Geographic. However, what makes the two sanctuaries different is the influence of the puritanical group in the former tomb. Our inability to embrace traditional, religious and cultural practices, have done harm to many such indigenous cultures. The valley of Kalash is one example, another testimony to this growing trend in our society is this tomb. 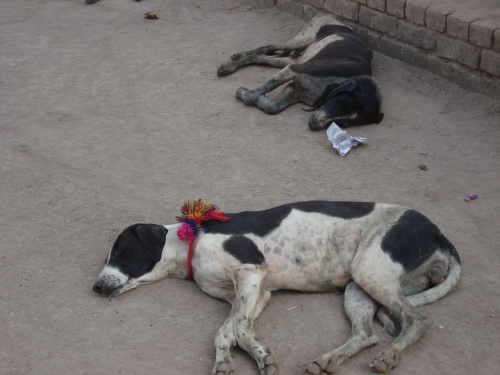 One response to “The Holy Pets”