From Baradari to a Madrasa

On the Bedian road, around 35 kilometers from the city of Lahore, there is a village known as Hair. As one crosses this village a road appears on the right hand side, if one is coming from the direction of the city. Taking a right on this turn, one would reach a Baradari after a distance of about half a kilometer. This Baradari, which was earlier outside of the village, now falls right in the middle of it.

The Baradari was summoned by Emperor Shah Jahan for the royal travelers. Since Shah Jahan ordered the construction of this Baradari¸ it is highly probable that he too some time stayed here. The Bedian road at that time was an important route, connecting many important villages. This village of Hair was one such village. It became famous for its immense population and market. At this important stop, Shah Jahan decided to build this edifice.

Another significance of the village is its association with the fourth Sikh Guru Ram Das. According to the Government Records collecting by the British, Ram Das was married into this village, and he stayed here for a little while. The house where he had stayed survived for a long time, but during the Afghan-Sikh clashes, the former got hold of this village, and the razed the edifice. Later Guru Ram Das’s rebel son, Prithvichan was also married to a woman belonging to this village. He got some land allotted to himself by the Mughals and constructed his temple here. This temple today stands in the outer-skirts of the village in a dilapidated state.

The history of this village exceeds the advent of the Mughals inIndia. It is reported in the Land Revenue Records that Hair was present when Babur entered this region. According to tradition the foundation of this village was laid by a person called Bhola Jut, who belonged to the sub-caste of Ahair. This village derives its name from his sub-caste. He belonged to a place called Kakrana in the Indian Punjab, city Sarhand, district Ambala. Here he got into a dispute with the Afghans. The Afghans got hold of his hometown, which meant that he had to move out with all his livestock. He came and settled here.

Hair at that particular time was a big jungle, and was called Lakhi. Lakhi was particularly dense. Many testimonies are found in history, where people have been lost in it. Ruins of older villages are found in the surrounding areas, which even predate Hair. These are known as the Thay Kot Kambo, and Bagha Kot. In Punjabi a Fort is called a Kot.

The Baradari of Shah Jahan is a popular building in the village. Ask anybody here where the structure is and they would guide you. The structure now serves the purpose of a functional Madrasa. It has been enclosed on all the sides. A minimum piece of land of around 2 kanals has been left vacant next to the building. The Baradari would lie on our right hand side, once we enter the complex from the sole gate. The ground has been raised, leaving some portions of the building buried. It has been white-washed covering away all the original frescoes, and brick work. The entire beauty of the building has been lost to the encroachers. Anybody who has seen the edifice in its original state would not be able to recognize the building with the change. This condition of the building is ironical keeping in mind that the building is listed with the Archaeology Department. Once upon a time, there was a board from the Department stating that it was illegal to bring about any damage to the building. The board is now missing.

In the Archaeology Survey of 1998, a detailed description of the Baradari has been given. It reads as following:

‘The baradari is square in plan erected over a raised platform built with small bricks set in kanker lime mortar and plastered. It has three multi-cusped arched openings on each side and there are traces of fresco paintings on the exterior walls. The roof of the baradari has collapsed. Internally there are traces of fresco paintings showing floral and geometrical motifs on the wall’.

The raised platform, multi-cusped arched openings, and fresco paintings have all disappeared. A new roof has been made, which was not present when this report was written. The arched openings on all the four sides have been closed to make one big hall. The entire missing portion of the building, which was around 1/3rd of the top portion, has been completed by big bricks, most probably by the Madrasa authorities. This building has now become a unique mixture of old and new bricks, which is not at all aesthetically pleasing.

One positive aspect about the transformation of the Baradari into a Madrasa is that the imminent annihilation of the building has been stopped. Earlier when the Archaeology Department was responsible for the protection of the building, there were no conservations efforts or maintenance. As had happened with the roof, it was only a matter of time, for the entire building to fall. Now however, with the shifting of the madrasa here, it is in the direct interest of the local authorities and students to protect the building, therefore it is unlikely that any further damage is likely to happen, unless or until, the concern occupants decide to the flatten the ‘outdated’ building and replace it with a ‘modern’ construction. Until that happens this Baradari of Shah Jahan is safe as a Madrasah. 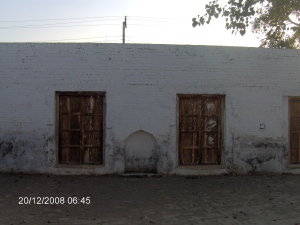 2 responses to “From Baradari to a Madrasa”