Op-Ed: Hassaan Ghazali on Public Transport in the Punjab

“If you think the NATO oil tankers have a rough time in Pakistan, spare a thought for the masses which use the local transport 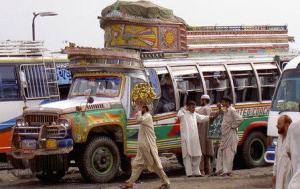 system. The manner in which buses, rickshaws and strange articulated three-wheelers ply on our roads makes it obvious that there is nothing really ‘public’ about public transport anymore. We have instead condemned the majority of the population, many of whom are poor, women and elderly, to a veritable shakedown staged by the road transport mafia, often in cahoots with our public servants.”

India Streets is pleased to invite comments and challenges from a wide range of perspectives for anyone anywhere in the subcontinent. This op-ed piece by Hassaan Ghazali setting out his views on transport policy problems and barriers in the Punjab expresses ideas which at the very least surely merit serious consideration by policy makers and others who can help them do better. We invite your comments.

Not unlike insurgents setting alight oil tankers, the government has been taking pot shots at public transport for quite some time now and the results are literally on the road. The sharp rise in cost of travel, fatal accidents, shoddy vehicles, and unreliability are all indicative of poor services that attract public disapproval in the shape of battered drivers and buses set ablaze.

Perhaps society’s rage is not completely unfounded considering that our roads are killing more people today than they were in 1999. And still the policy focus lies on facilitating private car ownership at the expense of the common man.

Despite several failed attempts in the past, our decision makers remain a hardy lot dedicated to the pursuit of new and improved transport schemes that defy convention, logic, and sometimes the law. Always worthy of consideration are the antics of the Punjab government whether one observes, admires, ridicules or pities them.

Recently it was announced that the Punjab government has finally succumbed to its indecisiveness and shelved the Lahore Light Rail Mass Transit Project. Normally portraying itself as a proactive, jump-on-a-motorcycle-and-head-for-the-next-village type of administration, it is disappointing to see our leaders head instead for the drawing board (again).

Of course not all the criticism leveled against the government is justified for recent experiences in Britain and America show that moving people can be difficult even for advanced economies that managed to figure out how to provide a decent public transport system. If London’s famed underground network can be plagued by financial and managerial crises, can we expect our own systems to be impeccable? The answer it appears is not so straightforward.

As we begin to question what drives public transport in Pakistan, we cannot ignore that the struggle to ensure safe and reliable services is made more complex by low per capita incomes and the risks to our economy that keep private sector investment at bay. It is also abundantly clear that ‘mobility’, ‘accessibility’ or ‘affordability’ are not inscribed on the papers circulating in government offices for if they were then people should have had a range of options for getting to their destinations by now. Instead, competition amongst transporters has been squeezed out over the years, leaving commuters hostage to a handful of companies coercing the government to make promises that cannot be honoured or afforded.

It is therefore shocking to hear a cash-strapped administration pledge subsidy schemes of hundreds of millions for the transporters of Punjab. Either the taxpayer is going to be seriously inconvenienced or perhaps this is another promise meant to be broken. Given that Punjab has already spent several billions on road construction and maintenance, a targeted operational and capital subsidy for public transport is an economic no-brainer, provided the government makes amends for failed experiments in the past.

Although the Punjab Urban and Road Transport Corporations have been disbanded since 1998, they continue to occupy space within the Transport House offices, managing properties and paying salaries to staff. On top of these lies an administrative Transport Department which the government seems unable or unwilling to restructure.

Without bringing closure to over twenty years of public spending on these entities, in 2009 the government ventured forth to reinvent the wheel by initiating a new transport company in Lahore. Strikingly similar to the failed transport Corporations of yesteryear, the Lahore Transport Company is both a service provider and regulator—a veritable judge in its own cause. Instead of cleaning up house and reforming public machinery to facilitate the private sector in providing a responsible service for citizens, public funds are being pumped into a system where the government masquerades as the private sector and circumvents or ignores its own institutions.

How good governance can get a foothold in a regulatory environment that lacks checks and balances in the exercise of absolute power is anybody’s guess, but perhaps the time has come to stop pandering to the politics of transport and carry out meaningful administrative reform in our transport sector. In times that demand austerity and a streamlined government it is hoped that the Punjab would take the lead in weeding out our institutions before creating new ones. However, the incumbent administration’s tendency towards obstinacy would suggest that a lot more money is about to be spent before another project heads for the scrapheap.

This article, contributed by its author, appeared as a signed editorial in “Pakistan Today” on 12 Oct, 2010. and has also been shared with the Sustran Global South Forum on 13 October. We thank the author for sharing this piece with our readers.

4 responses to “Op-Ed: Hassaan Ghazali on Public Transport in the Punjab”