Iqbal Hussain: The agony and the ecstasy

Iqbal Hussain’s new work reveals a darkly poignant preoccupation with death, an artistic crisis born of the violence in our midst. But this work may yet survive the changing cultural topography of Pakistan, says Raza Rumi

Being stuck in an awful traffic jam on Lahore’s Mall Road is an everlasting nightmare. This was the road which once housed the tempestuous and famously poly-amorous painter Amrita Shergil, as well as the grand old man of Indian writing in English, the legendary Khushwant Sigh, among other lost symbols of our bygone past. But mine was not a fruitless journey: I was heading to the Zahoor ul Akhlaq Gallery at the National College of Arts (NCA), where Iqbal Hussain’s new work was being displayed. I would not hav e gone to see this exhibition had I not heard about the significance of the show from the proficient curator of the gallery Qudsia Raheem. I liked to meet Iqbal Hussain in the throes of the walled city where he has reinvented a space for himself among his own people — entertainers, artists, traders, sex workers and a multitude of local and global visitors. Iqbal Hussain has been successful through his personal endeavors to put Lahore’s old city and its infamous red light district on the world map. He has achieved this primarily through his stupendous paintings and sublime rooftop views of Mughal monuments from the Cooco’s Den Café he owns and manages. 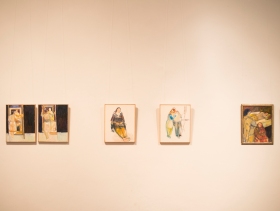 Iqbal Hussain’s work over the decades has brought to life the shades and aspects of sex workers from Heera Mandi around whom Hussain grew up. Most importantly, he is proud of his heritage and origins and, unlike the hypocritical and self-denying society in which he lives, he has publicly claimed ownership of this background. His work has obsessively captured the many narratives about the women who are central to Heera Mandi. In doing this, Hussain has humanized the portraits of the “dancing girl”, the aging prostitute and the honorable livelihood earner. Contrary to the religious decrees on such women, or the excessive romanticization of dancing girls in our culture, Hussain’s subjects are nothing but human. They are real and vulnerable while blessed with the ability to sing, dance and celebrate life and sex. In our socially conservative culture, made even more so since the advent of Victorian values in what was then British India, such characters have been the recipients of much derision. Hussain, through his momentous collection of paintings, has countered every stereotype and cliché that comes to mind about such women.

There are other characters also in Hussain’s collections. There are children who are linked to the sex workers. There are odd job boys who run around and do the bidding and undertake chores for an everyday existence. There are policemen who represent the extortionist state and use middle class morality to seek sexual and pecuniary favors. And more importantly, there are older women in Hussain’s work who become amorphous and unidentifiable, their expressions and moods converging with the general state of humanity. At the end of the day Hussain’s work is an affirmation of life and a rejoinder to the judges, jurists and preachers among us. 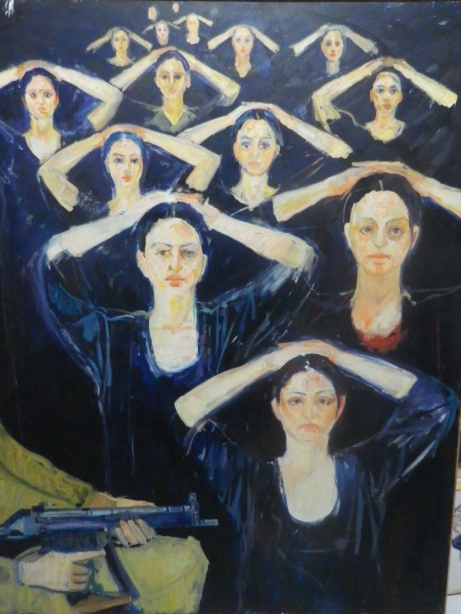 Even as a graduate and teacher of NCA, Hussain never got the kind of endorsement or “acclaim” from the art establishment of Pakistan. Like his subjects and his existence on the margins of Heera Mandi, his stature as an artist has never been “mainstream”. The art gods of Pakistan have produced countless pigeons and naked bodies, wild horses running on beaten tracks and many a miniature gone mad. But Hussain has been criticized for his portraits. Or for not being experimental enough. And so on. Hussain’s identity mixes his life, his locale and the frenzied attempt to remain true to himself. Those who have accused him of being “commercial” are only kidding themselves. A naked woman’s body shown with a pigeon is the ultimate acquisition by every bourgeois household in Pakistan. And that is not what Iqbal Hussain paints. Similarly, calligraphy mavericks have also been encashing the myriad names of the Creator and one rarely finds a public or private space unadorned with such displays of religiosity and spiritual pompousness. Hussain rejects it all and has undauntedly been true to his artistic yearnings.

As I reached NCA on that rainy morning – one of those mornings on which you can feel Lahore’s autumn transitioning to a smoggy winter – Qudsia gave me the greatest surprise of the year by having Hussain be at the gallery.  He was self-effacing, funny and looking a little older than he was the last time I met him. 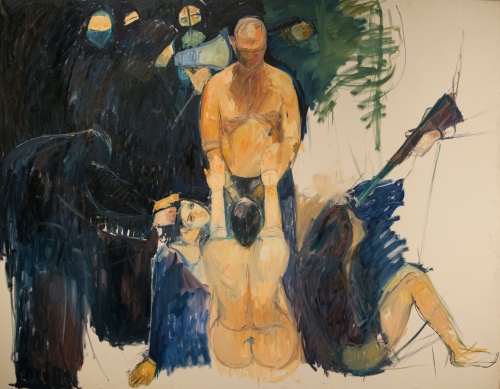 Qudsia had to run an errand and ushered me into a large hall where Hussain’s two major works were on display. These large canvases where traversing a new dimension of Hussain’s oeuvre. These paintings were Hussain’s interpretations of his impending demise. The first untitled canvas, larger than life, depicts Hussain in the death zone – between life and non-life – where a naked sex worker is redeeming him. Almost like Jesus Christ, Hussain is being lifted. But there is an extreme tension here. On the left and right are women clad in burqas, unmistakably inspired by the mosque-seminary complex in Islamabad that was assaulted by General Musharraf in 2007. The presence of a loudspeaker, guns and aggressive posture has scared another young woman begging for her life. At the center of this universe is the artist driven by his premonitions.

This canvas is a major departure from Hussain’s earlier work. As I ask him about the painting, he cites an illness that occurred immediately after he painted himself. Hussain recovered in the intensive care unit of a hospital. When we sit in the curator’s eclectic office, Hussain recounts his fears and the threats that he faces on a daily basis. The Cooco’s den is no longer the culture marker that everyone celebrates. Passersby tell him to remove the “un-Islamic” sculptures from the building’s exterior. Madrassa kids on occasion indulge in minor vandalism. Hussain tells me how in his old age he is seeing bigotry rise in the plural city of his childhood. The tolerance for sex-workers is waning, though the flesh trade for obvious age-old reasons is not on its way out. Hussain is tormented as an artist, as a man with visions for art, society and culture. 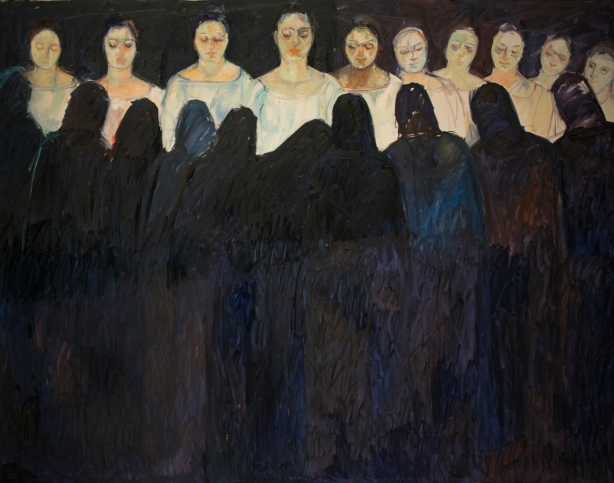 Pakistan’s transformation into a messy hybridized theocracy is well-known. It exhibits religion everywhere – in public spaces, in popular discourse, private conversations, employment and educational credentials. In such an environment Hussain is an oddity indeed: a thoroughly secular man from the old world of Lahore. These two worlds collide again in the second large canvas, which shows a line of familiar faces from the Heera Mandi faced by burqa-clad women from a seminary in a semi-confrontational, throbbing mood. Between these two rows is the dead artist – Hussain – and though we don’t see him, he is omnipresent. The generous use of black is also a new feature. There is unavoidable gloom and foreboding in the image, a sense of judgment and exclusion, even in the somber state of death.

Hussain is visibly tormented in this new line of work. I am not a great believer in foretelling and clairvoyance, but artistic visions are erratic and unpredictable. The other paintings in this exhibition feature the same dark mood with flashes of redemption and yearning for a change.

There is another painting in this series that was not too well displayed. This was a canvas where two burqa-clad girls with light in the background showed the turmoil they were facing. Hussain had inverted his concern for “fallen” women and showed them in their private moments. Another self-portrait was cheerful in a perverse sort of way, almost as if the artist was relishing his doom.

Hussain’s new work is appropriately titled ‘Imaginary Beings’ and marks a grand new phase in his artistic career. That he has experimented with his “own” genre is the most interesting aspect of this evolution. His favourite faces and characters are present. The women we have seen in his earlier works reappear in a new light. They are no longer marginalised women but rather redeemers of a peculiar kind. Strangely enough, they reminded me of Manto’s stories written around the Partition, stories in which women are central to the humanistic vision of the writer.

I wonder what our pucca art critics are going to make of this transition. But speaking to Hussain made it clear to me that the anguish of these canvases came through a personal experience. The forces of darkness have enveloped the artist’s imagination and yet he can see that the women warriors of Islam are even more oppressed than the Heera Mandi prostitutes they pity and disdain.

The curator of this exhibition deserves full marks for the thoughtful arrangement of the canvases and holding sub-themes within a rather large and diverse range. The starkness of Hussain’s work became even sharper for me when I heard the sound of rain inside the gallery. The leaking roof of the main hall for me turned into a metaphor for the crumbling state of affairs. The NCA itself is in the line of fire. Its fabulous art journal has been removed and may never be reprinted. The authors and college administration is facing a case in the High Court for having offended the bigots among us. The sad part is that state institutions, instead of upholding freedoms, are caving in. NCA, the prime symbol of Lahore’s cultural landscape, faces a serious challenge to assert its artistic freedom and in building a relationship with the society at large. Ironically, the journal under a dark cloud is called ‘sohbet’, inspired from the Sufi emphasis on desirable, enriching and soulful company.

In a strange way, Hussain is also a chronicler of our times, of Lahore’s diminishing glories and of a new Pakistan which is emerging from the ashes of the old civilization. We may have issues with it but it is also real and palpable. It is not clear what shape this new society will take. The initial signs are worrying but then art often survives ideological transformations. Perhaps it is too early to write off the resilience of our millennia-old values and heritage.

As I leave the NCA premises, I find myself wanting to spend a long day with Iqbal Hussain in his studio, chatting in Punjabi, Urdu and English and seeing the twinkle in his eye when he tells me his untold stories. I want to do it sooner rather than later.

3 responses to “Iqbal Hussain: The agony and the ecstasy”