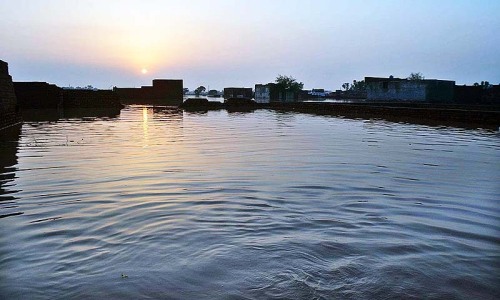 A view of houses surrounded by flood water in Rana Town area of Lahore.— Photo by APP

LAHORE: As many as 7,922 policemen across Punjab have so far evacuated 6,630 flood-hit people, including 29 families of Rahim Yar Khan district, 25 of Mandi Bahauddin and 20 of Chiniot.

According to a handout issued on Sunday, boats, trolleys and various vehicles are being used for relief activities by police teams who also rescued 5,203 cattle along with appurtenance of the affected people.

In Gujranwala region, up to 3,102 persons and 1,904 cattle have so far been evacuated by police.

As many as 2,530 traffic policemen have also been deputed to ensure vehicular movement in the affected areas.

Similarly, police medical ambulances along with paramedical staff also reached the flood-tossed areas and would remain on duty till further orders.

Meanwhile, Sheikhupura police countered an attempt by some elements to breach the BRB Canal.

In Lahore district, police are providing round-the-clock security to four dykes on the Ravi. Police also evacuated people from four villages situated along the river.

The DIG said arrangements were also made to divert traffic from three bridges as a part of precautionary measures, adding that a central control room was also set up to monitor rescue and relief activities.

RESCUE 1122: The Punjab Emergency Service (Rescue 1122) has so far evacuated over 7,000 flood affected people from districts and shifted them to safer places.

Over 300 seriously injured victims have been shifted to hospitals by ambulances in different districts of Punjab.

According to a news release, around 300 boats are participating in rescue operations across the province.

Around 70 people have been provided with first aid.

He also directed the district emergency officers concerned to ensure full support and carry out all efforts to evacuate people and transport them to higher grounds.

Furthermore, leaves of the rescuers have been restricted because of the situation.

He further directed them to extend help to local administration in evacuation of victims and livestock from troubled areas.