Bo-Kata – A page from “Lahore: A Sentimental Journey” of Pran Nevile

I cannot recall anything that thrilled me more than kite flying in my boyhood days. Whenever I observed my kite soaring towards the clouds, I experienced a sense of power and mastery over the elements. Perhaps, in a way, I identified myself with the kite itself flying so free and so high above me, far from the madding crowd, enveloping me in a spirit of freedom and adventure, I felt that kites also signified a hope, a desire for escape, fancy dreams entrusted to a breath of wind and connected to a string and the hand that clasped it.
Those were the days when kite fighting instead of kite flying was in vogue. Pecha larana, or to entrap another kite by pouncing upon it from above or below or sideways, depending on its position, was the most exciting part of the sport. The skill lay in crossing dore with an opponent until the vanquished kite, cut loose, floated helplessly over the rooftops. The victor and the teammate would announce the defeat of the rival with loud cries of Bo-Kata, and throw a challenge for a return pecha. The defeated rival would accept the challenge and stir up a fresh kite into the sky. The rules of the game did not permit entrapping the kite till it was high above in the sky. It required great manoeuvring to entangle or disentangle one’s kite from the clutches of the opponent. Sometimes, we heard a shrill commotion on the rooftops and saw boys running with bamboo poles to catch a drifting kite. A falling kite in a street or bazar also created a stir and passer-by of all ages would run to catch the booty as a prized possession. Some boys who could not afford to buy kites often amused themselves by watching pechas and catching the falling kites. 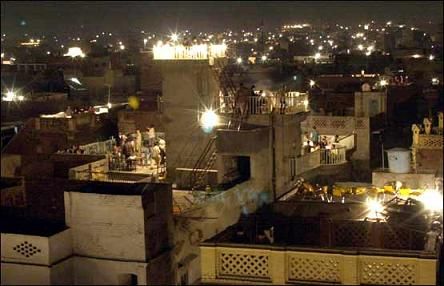 Every mohalla in Lahore had its own acknowledged khilaris (expert kite-flyers). As soon as they launched their kites, it was a signal for the small-timers to pull back their kites and leave the field open for them. They dared not venture to disturbed the khilaris, each of whom had established his sphere of influence. I was also a small khilari who after accepting a challenge from a rival would enter the battle only at an agreed time.
There was a style of kite flying called kaincha that entailed cutting the twine of the rival kite by dragging and pulling it with a sudden jerk. This was a practice followed by some boys who had very little twine and were looked upon with contempt by the khilaris who would sometimes even give them a beating for attacking their kites in this fashion.

We always looked forward to Basant, the king of all festivals in Lahore. About two weeks before its arrival, the kite shops were specially decorated and a large variety of kites of different colours, shapes and sizes were displayed along with small and large pin nabs and artistically wound dore in numerous attractive colour combinations, large stocks of kites were also brought from Lucknow for the occasion. The kite makers and dore producers worked round the clock. The khilaris used to pile up their stocks of kites and dore well in advance to avoid the last minute rush. Second in importance to basant was the Lodhi festival held on Makar Sankranti, which usually falls on 13th January. On that day we had kite flying on a large scale, a full-dress rehearsal for Basant, which falls usually in the first week of February. Basant signaled the end of the winter season in Lahore and the onset of spring.

The celebrations on Basant day would commerce well before daybreak, when specially constructed box kites carrying lighted candles like lanterns were set afloat in the sky. These moving lights in the sky made an enchanting sight and signified the inauguration of the great kite-flying festival of Lahore, unmatched anywhere else in the world. Rooftops and terraces were crowded with men, women and children of all ages. It was also a custom to wear yellow turbans on Basant day. The women, young and old, also sported yellow chunnis which lent a new charm to the festival atmosphere. By daybreak the sky would be ablaze with thousands of kites of different colours, shapes, sizes and designs. The whole atmosphere of the city also reverberated with the triumphant shouts of Bo-Kata and the blowing of the trumpets to proclaim victories in kite-fighting battles. There were famous khilaris in said Mitha, Wachhowali, Machhi hata, Sutar Mandi, Rang Mahal and other areas of Lahore. They challenged one another for paichas. The Basant festival was also held outside near Haqikat Rai’s Samadh, where crowds from neighbouring villages joined the city crowds and enjoyed kite flying. There were also renowned Khilaris who played for heavy staked in Minto Park. The winners were admired for their dexterity and skills in gauging the winds as well as for the perfection in the tactics of manoeuvring, surging, shielding and stretching during the kite flying.

One response to “Bo-Kata – A page from “Lahore: A Sentimental Journey” of Pran Nevile”