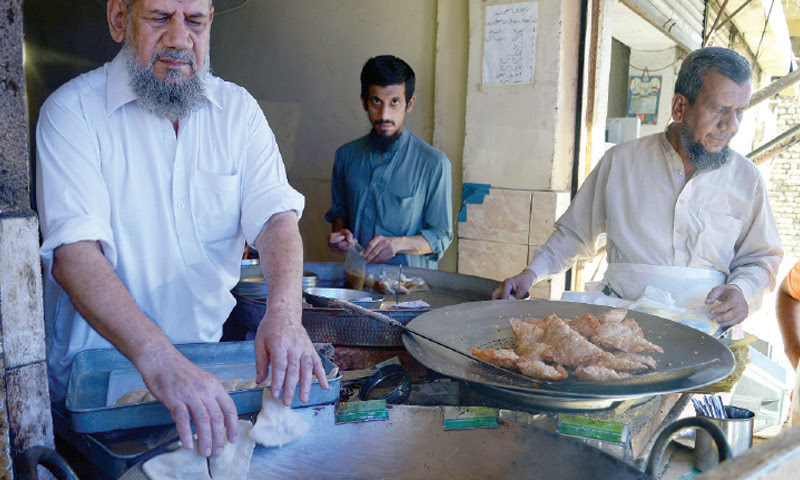 (TOP) Sheikh Lateef, the owner of the shop, is seen frying Samosas while the other picture is of a worker preparing the triangular delight.

RAWALPINDI: If you ask any resident of Rawalpindi about the best Samosa outlet in the town, the Lahori Samosa Shop at College Road will come as the reply.
A few yards away from the historic Liaquat Bagh, there is a road on the rear of the Government Gordon College.
The road houses China Market and famous food outlets, including samosa shops, Kashmiri tea vendors, Tikka houses and stalls selling fried sparrows and many others.
A visit to the area shows workers busy in preparing and serving different items and consumers waiting to get their orders.
Fast food is very popular in the city but people still like the samosas, the eastern delight, with evening tea with their families and guests.
The Lahori samosa is very simple but delicious. It is made with potatoes and served with sweet chutney and chickpeas with fewer spices which made the flavour more exotic. In the winter, people enjoy the samosa with Kashmiri tea while in summer the almond flavoured milk is available with it.
Maintaining its quality for the last 48 years, Lahori Samosa Shop remains the favorite place for most of the people in the twin cities.
Shops opened in adjoining areas with this name have failed to match its quality as the old chef never let out his secret recipe to others.
A large number of people, including college students, shopkeepers and women visitors to Raja Bazaar and China Market, are seen either sitting outside the shop or in their cars on the roadside enjoying the delicious plates. 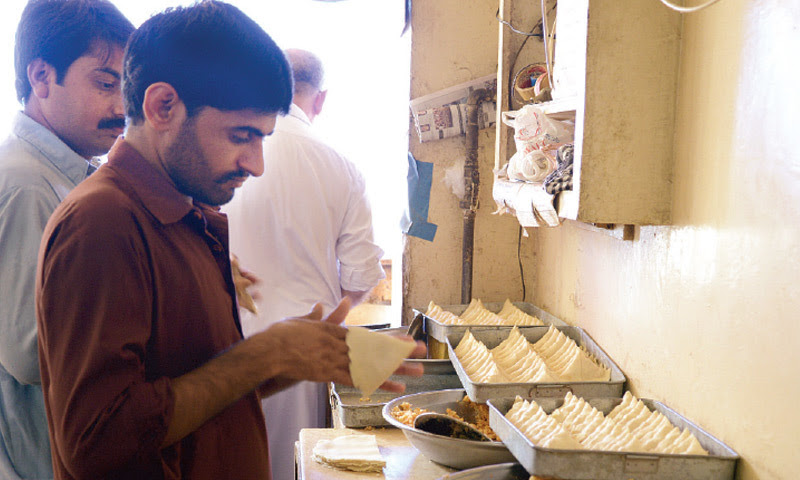 Sheikh Latif, the owner of the Samosa shop, says that he had been working at College Road since 1966.

“Around 2000 t0 2500 people visit the shop of samosa and Kashmiri tea daily. However, at the weekends and during Ramazan the sale increases manifold.”
He said the secret recipe of the food item was cleanliness and best quality of flour, spices and oil. He claimed that not a single person in the last 50 years had complained about the quality.
“We started the shop when there was no food stall or chicken rice shops in the area. Of course, the price of a plate of samosa is less compared to other food items but one can’t leave the taste which he develops,” said an old worker of the shop.
“I came to buy samosas for my sisters. In small gatherings of women in downtown, it is the main feature in the menu,” said Shariq Ayaz, a resident of Nayya Mohallah, who was waiting on the footpath for his turn.
Samina Anwar, a resident of Lalazar who works with a private bank, said she tried many shops in the city, including Saddar, Lal Kurti and Kartarpura but found the Lahori samosas the best.
“The potatoes stuffing is better as potatoes are cut in small pieces and properly cooked and fenugreek leaves sprinkled in the filling added flavour,” she said.
Naeem Ahmed, a resident of Chaklala Scheme-III, said he had been visiting the shop when he was a student at the Gordon College and now his children also liked it very much. He said the taste of the samosas remained the same for the last nine years.
“Though the pizza and shawarma have become popular among the new generation, samosas are still favourite among the people. But people also look for quality items. The potatoes stuffing is better than meat mince as nobody wants to eat meat due to its substandard quality in many areas,” he said.

One response to “Lahori Samosa”