THE CAPITALS OF PAKISTAN: LAHORE

This article was originally published here 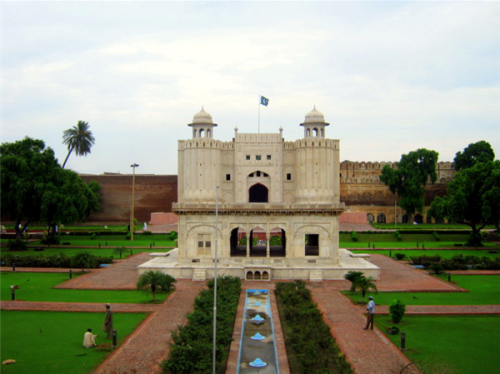 Introduction of the Capital – Lahore:

Lahore is the second largest city of Pakistan, after Karachi. It is the administrative capital of the largest province by demographics, Punjab. At present, the population of Lahore is estimated to be 7.5 million people with a current growth rate of 2%.  It is a rising mega city, comprising of an old but urban residential settings and new developing residential and commercial areas. Lahore’s economic base is broad and diversified. The major industries include the automobile manufacturing, home appliances, steel, telecommunications, IT, chemicals, pharmaceuticals, computers, engineering, heavy industries, and construction material. The city is the country’s largest software producing center and hosts a growing computer-assembly industry.

Situated along the River Ravi, the city is located 25 kilometers from Wagah Border that runs along the Indian city of Amritsar.  Spreading over an area of 1,014 km², and growing, it lies at the central east of Pakistan between 31°15 to 31°45 North and 74°01 to 74°39′ East at the average attitude of 702 feet above the sea level.  The land is mostly the flat alluvial plains suitable for cultivation with a subtropical low-latitude semi-arid hot climate.

Lahore is the undisputed center of cultural life. Tracing back the history of Lahore when it was the cultural center of the Northern part of the subcontinent, it is referred to as the cultural heart of Pakistan. It is a home to some significant historic architectural sights such as Lahore Fort, Badshahi (Royal) Mosque, Tomb of the Moghul Emperor Jahangir and Queen Nur Jehan, Anarkali Baazar, Lahore Museaum, Char Minar, Bagh-e-Jinnah and Chauburji. It is also acknowledged as the breeding place of performing arts in Pakistan. In the recent years, despite the law and order situation across Pakistan, Lahore has hosted large cultural and literary expos, including the Lahore Lifestyle Expos, literature festivals and world performing arts festivals. It is also regarded as the hub of publications as 80% of the country’s books are published in Lahore.

Unlike the violence prone politics of Karachi, Lahore has comparatively peaceful and sophisticated political landscape. While, Pakistan People’s Party Parliamentarians (PPP), holds a track record of winning in Lahore, particularly when it clean-swept the city in the general elections of 1970 and 1977, in the general elections 2013, Pakistan Muslim League (N) secured 11 national assembly (NA) and 23 provincial assembly (PA) seats from Lahore. PML (N) locked down the victory in Punjab, bagging 313 seats in the provincial legislature of Punjab. Pakistan Tehrik-e-Insaaf (PTI) has emerged as a new political force in 2013’s general elections securing three PA and one NA seats, challenging the clean-sweep by PML-N from Lahore. PPP had an upset defeat as it failed to secure any seat from Lahore, however, it still maintains considerable influence in Lahore’s politics.

Although, the political landscape is nonviolent in Lahore, in the recent years the linkages between political leaders and the land mafia have grown strong and the incident of politically motivated land grabbing have increased prolifically.

Lahore is making its way up as indicated by the development initiatives taken for the city, infrastructure development and the provision of the basic facilities to the residents. The provincial budget of Punjab for the fiscal year 2014-2015 out-lay by provincial government is PKR1,033.70 billion. PKR345 billion was allocated for Annual Development Program (ADP) in the budget, of which 40 % is reserved for the utilization in Lahore for the various on-going and several new development projects. These development projects will focus on the provision of better facilities to public in the sectors of health, education, water and sanitation, maintenance of law and order transportation, infrastructures, including the 20 mega projects initiated by Lahore Development Authority (LDA) for better transportation and roads network.

Annual Status of Education Report (ASER) 2013 indicates a slight improvement in the education sector in Lahore. ASER Pakistan reports that 65.2 % of children of 3-5 years have access to pre-school education which is the second highest in Pakistan, with only 3.7 % children out of school. The Education score of Lahore stands at 82.58 % according to Pakistan District Ranking Report 2014, published by Alif Ailaan, while the national standing was ranked at 8th out of 145 districts.  There are over 5,000 private schools in Lahore that are providing quality education to the children, along with over 1,200 public schools. Furthermore, there are nearly 25 HEC recognized universities located in Lahore.

Looking at the health indicators, it can be conceded that the health sector in Lahore is developing rapidly. Lahore has 42 public hospitals and 38 basic health units set up by the provincial government. While the number of private hospitals and clinics reach nearly up to 230. Infant mortality rate is around 50 out of 1,000 live births.

Economic Indicators:
Industrial sector creates heavy employment opportunities and attract bulk of investment in the country. Lahore also contributed towards GDP through its industrial sector. Currently, there are 2,107 registered and operational industrial units in Lahore, providing employment to millions of people. With a major industrial agglomeration, in recent years, Lahore has shifted from manufacturing to service industries. Some 42% of its work force is employed in finance, banking, real estate, community, cultural, and social services.

Lahore adds value to the national GDP by 13.2 % with growth rate of 5.6 % per annum in large scale manufacturing which includes software industry, pharmaceutical, automobile and chemical and, paints and steel manufacturing units. Lahore’s Per capita income is estimated to be $1,300. Moreover, the informal sector comprises of small scale carpet manufacturing units and entrepreneurs consisting of street vendors, local restaurants and unregistered small and medium businesses. Moreover, Lahore produces goods and services of estimated $40 billion annually.

In the recent years, Lahore has shown the signs of rapid growth in terms of social, economic and infrastructure development. It can be said that Lahore has become the epicenter of Pakistan’s most dynamic urban transformation. With an added advantage of comparatively better law and order situation, Lahore has a potential of transforming into a leading economic hub within a few years. The responsibility befalls at the provincial government to ensure that Lahore develops in a manner that promotes, rather than hampers the economic growth.