‘This is a Jihad’: Ayesha Mumtaz on bringing to heel Lahore’s restaurant ‘mafia’

This article was originally posted in Newsweek 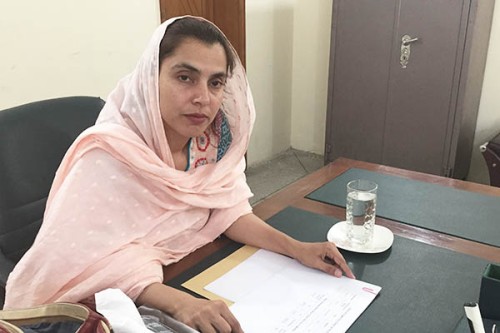 No one seems particularly shocked when the notorious Ayesha Mumtaz arrives for a surprise inspection of a roadside barbeque joint in Lahore’s Johar Town. Surrounded by three food safety officers and one Elite Force guard, she sweeps into the kitchen and immediately hones in on the stove—which is set up next to an open sewer. “You couldn’t find a better place to cook?” she asks a worker. “Where is the owner?”

A burly man, at least a foot taller than Mumtaz, steps forward and in a guarded tone tells her the concrete slab covering the gutter is broken. An accompanying waiter chimes in by claiming it will be fixed tomorrow. She cuts him off. “I did not ask you.” Moving deeper into the “kitchen”, Mumtaz orders the owner to open the freezer. Her face narrows in anger. Using her cellphone, she photographs all visible violations—a dirty freezer, no soap at sinks, poor hygiene of food handlers, improper storage of meat and dairy, proximity to sewage.

At least 50 people—customers and employees alike—are now watching the proceedings, following the 38-year-old civil servant’s every move. Playing to her audience, Mumtaz scolds the owner: “If your patrons knew what you were feeding them, they wouldn’t even spit on your food.” Finding that he has no food license, Mumtaz’s staff shutters the business. Pointing at his serving tables, which encroach on public space, she jokes with her team: “He should thank his stars I’m not in the City District Government anymore, or I would’ve bulldozed this place.” It’s unlikely the demolition would’ve gone any faster than Mumtaz’s incursion; she inspected, documented and shut down the restaurant within 28 minutes.

Since being appointed the director of operations at the Punjab Food Authority in June, Mumtaz and her team of 24 has led over 11,000 inspections—covering less than 50 percent of Lahore’s estimated 40,000 eateries—collecting over Rs. 6.4 million in fines through September. Under the Punjab Food Authority Ordinance 2015, the fines for violations can from range from Rs. 500 to Rs. 500,000. If a violator fails to fix identified faults ahead of a follow up inspection, the fine is doubled.

“This is a jihad,” Mumtaz tells Newsweek from her scantily furnished office. “The [restaurant] mafia has the audacity to indulge in such lawlessness without fear of any retribution,” she says. “This mindset has to go.”

Born and raised in Lahore, Mumtaz joined Pakistan’s civil service in 2001 after graduating from the Lahore College for Women. Since then, the mother of one has worked for the Lahore Development Authority, the Special Judicial Magistrate and the Services and General Administration Department. Her entire career has been devoted to breaking the ‘mafias’, she says. “You go to work in any public office and you’ll find yourself confronting a mafia,” she adds. “I have dealt with them all.”

Her efforts have not gone unnoticed. The PFA began documenting unhygienic restaurants on Facebook in August 2012, but its reviews have ramped up under Mumtaz, who leads up to 10 inspections daily. The sheer volume—and refusal to ignore establishments owned by and belonging to the elite—has propelled the Punjab Food Authority, and Mumtaz especially, into the spotlight. 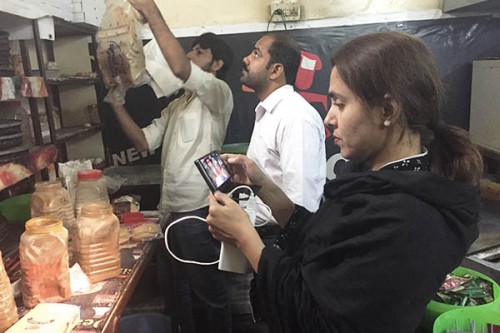 Known as the ‘Dabangg (fearless) Lady’, Mumtaz has quickly acquired her own mythology. Customers at the Johar Town barbeque praised her for doing a great job, adding that all bureaucrats should be like her. Online, her postings on the PFA’s Facebook page have attracted over 337,000 ‘Likes’. Supporters went so far as to declare she was the daughter of famed Pakistani comedian Rangeela. Mumtaz, the daughter of a teacher and retired income tax official, has denied this. Her popularity also extends beyond false parentage. In the past three months, two women have impersonated her and attempted to use her notoriety to blackmail restaurants owners for bribes. Both are currently under arrest.

But not everyone is a fan. Last month, hearing a petition filed by the Lahore Restaurant Association, the Lahore High Court barred the PFA from naming and shaming unhygienic restaurants on Facebook until they were proven guilty in court of serving substandard food. “Let’s be fair, no one wants to eat unhygienic food,” says Tehseen Shah of the Lahore Restaurant Association. “While we have no personal grudge against Ayesha Mumtaz or the PFA, you should not be allowed to victimize businesses.” He adds: “There has to be a procedure. The PFA should collect evidence after an inspection and then send the samples to a forensic lab for examination.”

The PFA, utilizing an online categorization system developed by the Punjab I.T. Board, is hoping to streamline this process. Under the new initiative, restaurants will be awarded stickers embedded with cleanliness ratings. These stickers will have barcodes that, once scanned, will quickly provide all necessary information about each restaurant without requiring ‘raids’.

Muhammad Sarfraz, whose restaurant was sealed by Mumtaz last week, agrees with Shah. “When she [Mumtaz] came we knew that no matter how clean or dirty our kitchen was, she was going to shut us down,” he told Newsweek, ahead of appealing the PFA’s decision to shutter his establishment. Sarfraz’s complaints mirror reoccurring grievances against Mumtaz: she is accused of haranguing restaurants to increase her own public profile and being unqualified to inspect food safety.

The civil servant has little patience for either concern. “If I can see mosquitos on ingredients or fungus-laden fridges, do I need a lab to tell me that the food is dirty?” she asks, while noting that the PFA does test samples for contamination if needed. She’s equally defensive when accused of seeking publicity. “The media is very relevant to our tasks,” she says. “If anything, I feel pressure that Ayesha Mumtaz has to work a lot more with the spotlight on.”

Any pressure on her, says Mumtaz, is countered by the unfailing support of Punjab Chief Minister Shahbaz Sharif. “It is because of his personal efforts that the PFA is able to carry out its operations at such a massive level,” she says in praise of her boss.

Back in Johar Town, Mumtaz disgustedly photographs soiled washcloths, exposed raw meat and expired foodstuff at a dimly lit pizza joint. She grabs a greasy meat tenderizer, striking a table with it like a judge’s mallet, “Order, order!” she says to her snickering staff. “This should be in our office.” The manager is not amused.

He also doesn’t have a vending license and the restaurant’s kitchen is swiftly sealed with tape and wax. As Mumtaz’s staff explains their requirements to him, she pulls out her phone and reads out an anonymous tip sent via text message. A hospital kitchen is serving patients adulterated food, it claims. “I get these all the time,” she says, putting the cellphone back in her pocket.

Some tipsters are more direct. As restaurant workers shut down their establishment in Johar Town, a woman and child approach Mumtaz. “Please check [that restaurant],” points the mother to a chain restaurant down the road. But when Mumtaz directs one of her officers to make a note, he says it was found clean in an inspection just two days ago. “Really?” she says, “I didn’t even remember.”