Building with the inscription

From the foundation stone to the very inch of the complete structure – every building encompasses a journey. But some stories always remain untold like the story of Gobind Ram and Hindustan Commercial Bank. Sixty years since the partition of India and the building with the inscription ‘Gobind Ram Kahan’ and ‘Hindustan Commercial Bank Established 1805’ still remains amidst the hustle bustle of vendors, gold and crockery traders of Rang Mahal in the walled city. 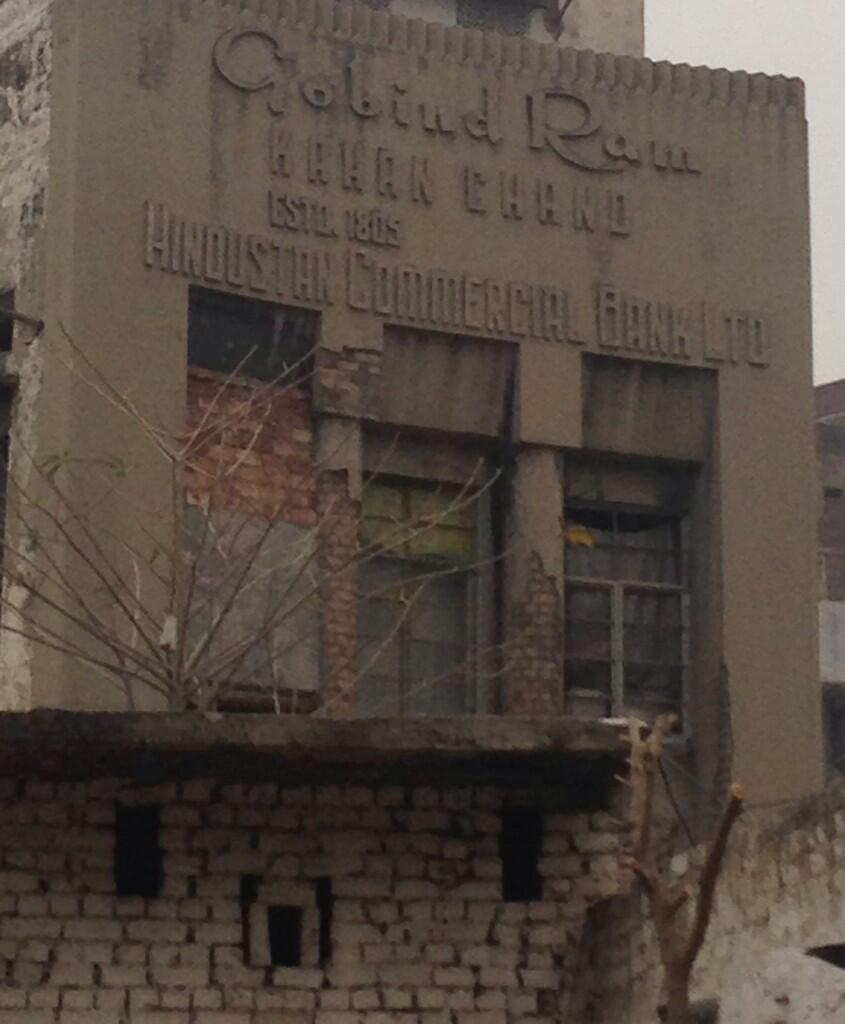 Badar Munir Butt of AL-Sadiq Jewellers was four years old in 1947. Though he faintly remembers the partition violence he has heard stories about Gobind Ram and the building. His shop is adjacent to the half burnt building. According to him, Gobind Ram owned a shop at the ground floor of the present building. Trader of achaar, chatni and sharbat, Gobind Ram’s sharbat was very famous in this area. Supposedly, one of the richest men in this area he was well-respected too. And, with money comes influence. When he, with his family, left Lahore for India he had put the money and jewellery in the basement of this same building. Some years after the partition he came here with Army officials from both India and Pakistan and took away all the jewellery and money that they had kept safe in the basement. To the neighbours’ dismay, the loads of gold and money kept lying there all those years without them knowing about it.

According to an elderly man who owns a shop in the basement of the building.and also one of the oldest residents of the area, Gobind Ram’s sharbat was “famous and if one bought it for one takka, one would reach Amritsar but the sharbat wouldn’t finish.”

All the gates of Lahore survived the violence of partition except the Shah Alam Gate which was destroyed along with other buildings in this area. From Shah Alam to Rang Mahal, this was the sole building that survived and that only because it was a new building. Some myths follow the existence of a trench in the basement that goes to the Lahore Fort.

The branch of Hindustan Commercial Bank for which the new building was made never saw the light of the day. Established in 1805 one branch of the bank was supposed to be opened here in Lahore and Gobind Ram was among the partners.

Majeed Sheikh, a renowned historian, informed that The Hindustan Commercial Bank Lahore was to be one of the five branches of the bank that was established in 1805 and whose first branch was opened in Amritsar. The bank opened in Bengal on January 2, 1809. Two branches were to be opened in Lahore, one here in the walled city and the other in Neela Gumbad. “After 1965 war with India the building was declared enemy property.”

During the partition the present area of Rang Mahal, Suha Bazaar and the adjoining area was a Hindu majority area. A Baowli, a reminiscence of the Sikh history in Lahore, was also situated in this area. The Baowli was destroyed during the partition violence. But some Sikhs visit it even today to remember the long forgotten ghosts. Dr Khan, the Chief Minister of One Unit, got the Baowli renovated during his government. Haveli Mian Khan, also located here, now has almost hundred small houses in its premises. Settlement Department gave the houses on claim while some were built.

Kashmiri Bazaar was the hub of trade in pre-partition days. There was a press and several famous shops in this locality. Being a Hindu majority area the trade and business of this area was also controlled by Hindus. Now the building is encircled by garment shops, gold market and crockery.

This article was originally posted here written by Sarah Sikander.