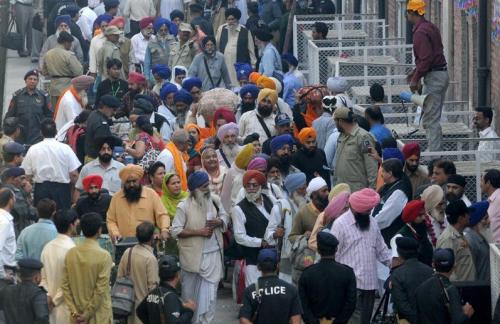 LAHORE: Over 2,900 Sikh Yatrees from India and thousands of others from all over the world including America, Canada , UK, Europe, and from parts of Sindh have reached Nankana Sahib to participate in the celebrations which will continue till November 11.

1st of Vaiaskh in the desi Bikrami calendar falls sometime around the 14th of April every year. This date also marks the beginning of the Vaisakhi festival, known as Baisakhi too, all across the Indian peninsula. The celebration of Vaisakhi commences the beginning of the cutting of wheat all over the country. Wheat being the most important stable in South Asia is the reason why this festival is so significant to farmers in both India and Pakistan. Having purely originated from seasonal changes, Vaisakhi has been given cultural and religious hues from the local communities. The Hindus in different regions of the country pray to their local deities during this time of year. For the Sikhs however, there is a different significance. In their culture it was on the 1st of Vaisakh that the tenth Sikh Guru finalized their religion. He gathered all his followers at Anandpur, India, where he gave them the famous 5 ks of Sikhism. He also ordered them to end their names with Singh. This is how Vaisakhi, a celebration of the harvest, became a religious festival for the Sikhs. Every year, Sikhs from all over the world, flock to their religious sanctuaries to commemorate this auspicious day. The Sikh celebrations in Pakistan which begin from Gurdwara Punja Sahib, Hassan Abdal, and then move to Amenabad, Gujranwala, are part of the annual event.