The entire Mohalla has been lit defying the darkness of the night. Children, teenagers and young adults have worked day and night to decorate their Pahari, which is really a much more than the name suggests. Those with minimal resources are only able to pull together a small lump decorated with the all sorts of toys, including cars, stereos, and numerous other commodities. However with the bigger boys, there is a larger stake involved. Communities work for months, getting the donations, lighting, speakers, and symbols ready for this special day. Within Mohallas there are numerous stalls showing off their talents and hard work. What were only suppose to be symbols, emblemizing life of the Prophet has turned into a  fierce battle of who spends more money, whose decoration is more grandiose, and who has a greater turnout. This scenario when described to a Muslim from Lahore would instantaneously conjure images of celebration of Eid Millad ul Nabi. However when such a scene is described to a Hindu, he/she would also be able to relate the images to a festival that they call Ram Navami. This is the celebration of the birthday of the Hindu deity Ram. The Hindus have been celebrating this festival for centuries. Every year, on this auspicious day, they would take out processions, and entertain large crowds. Children and young adults would make a small Pahari outside their house from the money that they are donated from the people, where they would place idols and other symbols, which would relate to incidents from their deity Sri Ram Jee.

As much as the hardliners fuss about the fact of the matter remains that the concept of celebrating Eid Millad ul Nabi by taking out processions and competing in these fancy Paharis emerge from the celebration of Ram Navami. This sort of a celebration is very South Asian in origin and character and one would find no such tradition in the “Islamic History”.

Eid Millad ul Nabi is suppose to be the day of the birth of the Prophet of Islam and it is also supposed to be the day, when he died. Before this became a celebratory day, people used to give Khatams from their homes and celebrate the day quietly. In fact 75 years ago this day wasn’t celebrated at all in the pompous manner that it is celebrated today. The Hindus on the other hand have been celebrating Ram Navami in such a manner for centuries. Numerous processions are taken out and people sing, dance and make merry throughout the day. Seeing the zeal of the Hindus Maulana Syed Dedar Ali Shah led the first procession on this day on the lines of Hindu celebration. This was in 1935. The procession started from Delhi gate Lahore.

Maulana Syed Dedar Ali Shah was the Imaam of Masjid Wazir Khan. He actually belonged to a place called Alwar in the Indian province of UP, but at that time was posted in Lahore, which is where he chose to stay for the rest of his life. Maulana was of the opinion that if the Hindus could celebrate the birthday of their deity with such pomp then why they Muslims couldn’t, also commemorate the birthday of their “true” Prophet with similar zest. It is with this thought that he approached various people of his community trying to convince them in joining his procession on this day. In the first procession of Millad ul Nabi ever, there were less than a 100 people, the procession began from Masjid Wazir Khan and ended there too. For a lot of years to come Masjid Wazir Khan remained the focal point of the procession, nonetheless the percentage of people attending increased every year.

Inside of the Lohari Gate, there is a Mohallah by the name of Khadak Singh. A man named Karam Elahi from there was greatly motivated by the cause of the Maulana, so soon he commenced his own smaller procession, which used to join the main one. Similarly in the Kashmiri Sadhuan Mohalla inside the Kashmiri Gate, Inayat ullah Qadri started organizing Mehafal-e-Milad on this day, in the local mosque. This Mehfal used to began at 10 in the morning and continue till Zuhr prayers. After the Namaz they use to walk towards the Chowk outside of Delhi Gate holding each other’s hand, where they would join the bigger procession. Over time the popularity of the event increased many fold and people from the neighboring region started traveling towards the city to participate in it. They used to commute in highly decorated bull, camel, horse, etc. carts. Later as motors and trolleys became more widespread they also became part of the procession.

After the death of Maulana his son Maulana Abu Al-Hasnat Syed Ahmad Qadri became his successors. Eventually the strength of the procession reached such a level that a permanent stage had to be build outside of the Delhi Gate, where the procession would gather and the speaker would address the people. This platform became the famous Millad Chowk outside of the Delhi Darwaza. A major boost was given to the event, when on 16th of April 1973 the Governor of Punjab, when Malik Ghulam Mustafa Khar addressed the crowd. This was the first time that any Government representative had recognized the day. During the Islamization policy of Zia this day was made a National Day and celebrated at the Government level. This way its popularity spread all over the country. Maulana Inayat ullah Qadri was the third leader of this event. He died recently at the age of 80 on 20th February 2002. Among the many famous families of Lahore that are devoted to him, one is the Shariff family, which is also the reason why he and this event received immense Government patronage during the era of Zia, when Nawaz Shariff was the Chief Minister of Punjab.

There are, nonetheless, two school of thoughts, regarding the celebration of this event. One that belongs to the Ahl-e-Hadith and Deobandi inspiration believes that this is outlandish and doesn’t conform to the spirit of Islam. The dancing and singing that this event includes are all vulgar activities, according to them. The other school of thought includes the rest of the groups, including the Shii, who are happy with the way things are. It is this antagonism that was witnessed on Eid Millad ul Nabi in the year of 2010, in Faislabad and Dera Ghazi Khan, where there is a strong hold of the former school of thought.

Even though this event finds its origin from a Hindu tradition, this doesn’t mean that the celebration of the event should be banned on the basis. In the name of Eid Millad ul Nabi ordinary people find a way to vent their frustrations, doing something positive, which is celebrating life. The significance of any festival is not in what is being celebrated, but on how it is being celebrated. In the drudgery existence of ordinary people, there should be more celebrations like this for this society to grow healthy. Secondly this event could also become part of the common heritage and tradition that join the people of India and Pakistan and therefore can act as a bridging force in bringing peace to South Asia. The people working for this very cause should draw inspiration from commonalities like these to bring the people together. 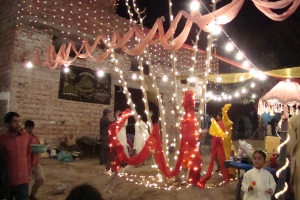 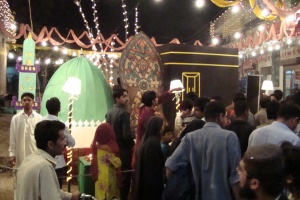 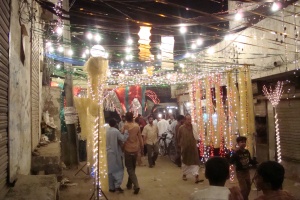