Following in his footsteps by Haroon Khalid 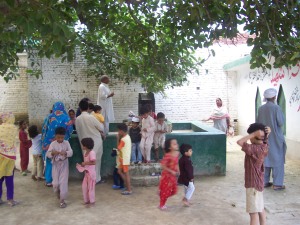 My friend Iqbal Qaiser, a Punjabi intellectual, sometime ago, made an interesting comment. He says that the names of some people are recorded in the history because of the monuments that they have built. Shah Jahan is one such character, remembered because of the Taj Mahal and not vice versa. However, there are others because of whom some spaces become important. Baba Bulleh Shah belongs to the second category of people.

Bulleh Shah’s Murshed or his spiritual leader Shah Inayat, was from Lahore, whereas he used to live in Kasur. To meet his master Bulleh Shah used to travel frequently between the two cities. The route taken was the same Ferozpur road that drives through the Chungi Amir Sadhu, Ichra, Mozang and then Lahore. On a car today the journey is likely to take no more than one and half an hour, however in his days, when commuting toke place via, a cart, or on foot, it would have been a much more difficult task. In a Punjabi book called ‘Dhondla Chanan’ written by Iqbal Qaiser in 1992, he mentions that on his way to Lahore Bulleh Shah used to spend some time at a village called Amir Sadhu.

Upon taking a left turn from the Chungi, facing DHA, after a couple of left turns one needs to take a left on small road. This would lead us to a mosque called the Bulleh Shah Masjid. This mosque now stands on the spot where Bulleh Shah used to spend his time resting. Adjacent to an open ground, where there are two banyan tree, with a few graves under it, this mosque is no meaning a remarkable architectural construction. Next to it is a small complex, with a couple of rooms, where the current Gaddi Nasheen sits. This mosque is meant to honor the legacy of Bulleh Shah, and this is what he had to say about his adorers.

Traders (read those who cheat) live in Dharam Sal, Frauds in Thakar daware,

Much has changed around the complex, yet with the open ground and the trees, this place retains its essence of centuries past by. Minus the buildings, the complex and the graves, the rest of the location is exactly how Bulleh Shah would have seen it.  Today not even the inhabitants of this mosque know the historical significance of this site. The name of the mosque is coincidental to them.

About 20 years ago, this place became the site of another incident. A young teenager belonging from the area decided to spend his chilla of 40 days inside a grave, just outside the mosque. This was to mark his rite of passage. His name was Baba Ilyas, who eventually became famous as Saeen Guttu. He interred the grave. A small hole was made where his face would have been, and a thread was passed through it. From the outside the string used to be pulled, and the occupant of the grave used to do the same from the inside, to confirm that he was alive. Accompanying his grave was also some food and water. After 40 days the man reappeared from the grave, alive, and became a living Saint. This incident was widely covered by the newspapers of that time.

Saeen Guttu is still alive, and I happened to meet him, when I visited the mosque. He claims to be in his early 30s, even though he looks much older. He supports a grey beard, and has round features. He was skeptical of us, as he claimed he was harassed by the authorities, once he successfully completed the chilla, so he doesn’t allow us to take his pictures. He plans on repeating the same thing, but wouldn’t disclose the details, because of the negative reactions he is likely to encounter by the authorities, he tells us. His father and grandfather are buried in the same ground, and locals pay homage to them regularly. One day he is also likely to be elevated to the same status. I was expecting Saeen Guttu to be some sort of a local Saint, but that didn’t happen. In fact the new peer was a Kashmiri Butt by the name Baba Murtaza. I asked him a few questions about the incident and this is what he had to say.

He remembers the incident of Saeen Guttu, as he was present when it happened; in fact both of them are neighbors. Saeen Guttu became a Peer but he could not handle it. He became lazy, always asking for people to do his things. He started thinking of himself as being larger than people, so eventually he was disposed, and was replaced by this gentle fellow. Baba Murtaza is a medical practitioner, or as some people would say a quack. Now finally, (as if he is doing all of us a favor) he has taken up the ‘business’ of Peer Mureedi. He was surrounded by his admirers, doing different chores for him, while he went on and on about his role as a Peer. Saeen Guttu also was one of his devotees, according to him. He remained the sole spoke-person for everyone present, while I was there.

History is replete of examples, where a prominent character is taken up by various, divergent school of thought, to bring legitimacy to their claim. The case of Muhammad Ali Jinnah would also be an interesting study in the context of Pakistani context, where all political parties (including those, which were vehemently against him) claim to be his rightful successor. The poetry of Bulleh Shah was an attempt to break away from the institutional nature of religion, however after his death, and the ascendancy of his status, the very same people he criticized have taken up the cause of his vision and claim.