This article was originally published on TNS

Work on restoring Masjid Wazir Khan’s eastern façade and forecourt is fast underway, despite the challenges, and the place is likely to be open to public by the end of this month

Constructions around the mosque had become an eyesore. — Photos by Rahat Dar

Masjid Wazir Khan is a jewel of Mughal architecture. It has retained its grandeur even after the passage of around four centuries since it was built between 1635 and 1640AD under the orders of Hakim Ilm ud Din, the then prime minister of King Shah Jahan. Over time, the magnificent structure has weathered many storms and seen its surrounding land, the forecourt in front of the eastern façade as well as the lower parts of its boundary walls devoured by encroachments.

Till recently, the situation was so bad that the constructions around the mosque became an eyesore, making it look like a structure totally out of place. The sight of the surrounding residential buildings and shops, motor workshops, and welding facilities right next to its boundary walls, was so overwhelming that the mosque would appear subdued in comparison.

It was in 2013 that an initiative was taken with the help of funds provided by the Royal Embassy of Norway in Pakistan, to restore the historical monument’s northern façade. Technical support was afforded by the Aga Khan Cultural Service Pakistan (AKCSP) — an arm of Aga Khan Trust for Culture — and work began with support from the Walled City Lahore Authority (WCLA). Around 70 shops had been removed from around the place, their owners compensated by the Punjab government.

The project was completed in 2016. Prior to this, work had also begun on restoring the eastern façade and the forecourt which used to be the hub of cultural activity and trade fairs in the Mughal era. This time around, the financial support of $1.2 million came from the US Ambassadors’ Fund, while the other players remained the same. The latest on the project is that it is fast reaching completion and is likely to be opened to public by the end of this month.

“For those who thought the execution of the project was an easy task, it was a challenging one — including digging of the forecourt eight feet under,” says Shukurllah Baig, manager of the project, talking to TNS.

He explains that over time the ground level of the Walled City, especially the areas next to the mosque, had risen by eight feet. “Because of this, the hujras (chambers) on the outer side of the mosque got buried. During the excavation, these were recovered along with many other rare artifacts that shall be put on display in the future.”

The historians believe these hujras housed shops rented out to people in those times. The purpose, according to them, was that the rent proceeds could be expended in the upkeep of the mosque.

“At places, it was observed that a mixture of daal (lentil), glass and quartz had been originally used as building material. So, it was important that we used the same material [during restoration].”

Baig says the restoration of the forecourt has created an open space of the size unheard of in the entire Walled City and will result in a sharp increase in tourists’ flow. “It will ultimately create business activity that shall benefit the locals.” 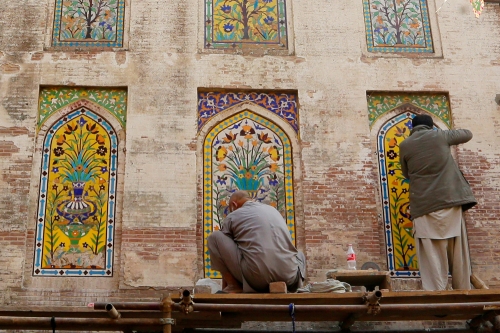 He also reveals that spaces have been earmarked for planting trees in the forecourt that shall give it a pleasant look. “With a low-height boundary wall, built around the forecourt — though eight feet above its level — and staircases, the place becomes an ideal venue for cultural events such as musical performances, qawwali nights, mushaira etc.”

Muhammad Ali, a Walled City resident who used to be a vendor in the area, says he and other folks running their businesses here were wary about the project on the north side when it was announced. “Earlier, we thought the government would force us to leave and re-allot spaces to its favourites. I was furious at that time, but now that the project has been completed, I think it is for the collective benefit of the Walled City.

“Yes, I faced loss in my business, post re-location, but over the years I have managed to develop my clientele at the new place,” he adds.

Zeba Hashmi, Coordinator at the AKCSP, points out that extreme care was taken during the execution of the project, and qualified conservationists, architects, craftsmen and the like were engaged to help restore the monument as close as possible to its original shape. The microbiologists were also involved in order to study the effects of bacteria and other micro-organisms on the material because of exposure to light and the envrions over the centuries.

“Algae can grow on the building material, and the micro-organisms, amidst the different layers of the glazed tiles can make the outer layer fall. Therefore, it was important that we took care of this aspect also.”

She says that the students of National College of Arts (NCA) have done fresco work at the place. They were especially trained for the job by a team from Sri Lanka that was in the city for the restoration of the Shahi Hamam. “There were a number of girls in the team who could be seen standing on the scaffoldings, and working on the surface of the eastern façade. 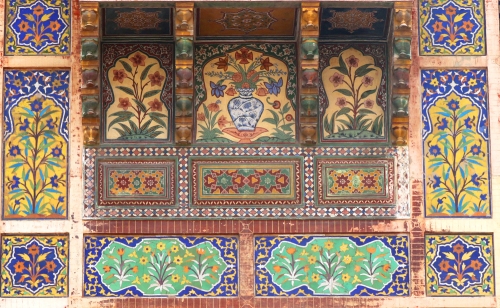 “The AKCSP team of experts analyses the composition of the material originally used and then through reverse engineering decides which material to use. For example, at places it was observed that a mixture of daal (lentil), glass and quartz had been originally used as building material. So, it was important that we used the same material [during restoration].”

Though the forecourt is ready for inauguration, there is still a lot more to be done to restore its glory.

Kamran Lashari, Director General (DG), Walled City Lahore Authority (WCLA), says the Punjab government has approved Rs 533 millions that will be used on acquisition of certain properties and restoration of the interior portions of the mosque. “Some of the houses acquired shall be demolished while others shall be retained and renovated in a way to look a part of the whole project.”

Lashari also speaks of a shrine, opposite to the eastern façade, whose outer structure has grown significantly. “The WCLA has been in talks with the locals, and it is hoped they shall agree on reduction of size,” he says. “They should have no problem as the grave of the saint shall remain untouched and intact.”

When asked about use of modern-day material in the boundary wall of the forecourt, he admits there has been a lot of discussion on the issue. “After deliberations, it was decided that this should make the newly built boundary wall’s structure distinct from the historic one. This way, the restored eastern facade shall become even more eye-catching.”

In this context, there is the issue of the administrative control of Masjid Wazir Khan waiting to be resolved, as both the Punjab Auqaf Department and the WCLA are vying for the same. Lashari says the Authority has no problem with the religious matters pertaining to the mosque that fall in the domain of Auqaf, but it shall be given the administrative control and authority to restore and maintain the place.