150 women participate in motorcycle rally on The Mall Lahore

This Report was published on the Express Tribune 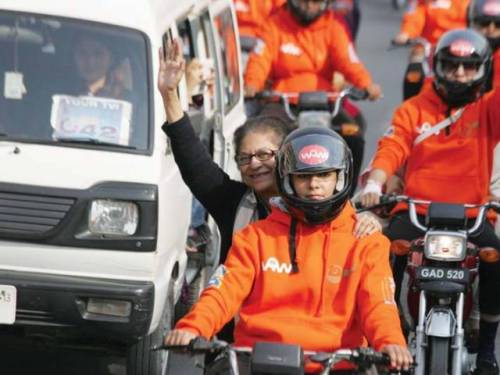 LAHORE: The Women on Wheels (WoW) project was launched on Sunday with a motorcycle rally for women on The Mall.

A total of 150 women motorcyclists, who completed training from the Special Monitoring Unit on Law and Order and City Traffic Police, took part in the rally.

By Tanya Khan
This article was originally posted on Newsweek 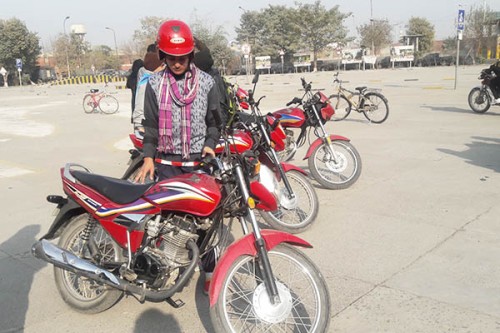 Women in Pakistan face significant challenges. Honor killings, forced marriages and sexual harassment are among the worst, and most visible, offenses, but the pervasive misogyny is no less prominent on the country’s roads, where men can often deride and harass women drivers, prompting many to seek male ‘protection’ while driving. The harassment tends to be worst for women on bicycles or motorcycles, traditionally considered “men only” vehicles. The sight of women on motorcycles is so rare that images of women on public roads have gone viral on social media amid calls for greater government support for the “pioneers.” The Special Monitoring Unit (Law and Order), in collaboration with City Traffic Police Lahore and U.N. Women—an organization dedicated to gender equality—hopes to achieve this with Women on Wheels, Pakistan’s first government-sponsored training program for women who want to ride motorcycles.

“We [the Punjab government] want to make sure that women feel empowered” and at par with men, says Salman Sufi, the head of the law and order wing. By training them to ride motorcycles, which are a much cheaper alternative to cars, women can become more independent, he added. To start off, 150 women are being trained by the City Traffic Police at their Thokar Niaz Baig office. Imtiaz Rafiq, who is supervising the lessons, says over 60 women have been trained in the past three weeks using motorcycles donated by Honda.

The training process is designed to ensure even complete novices can achieve mastery of the vehicle within a few weeks, says Lady Traffic Warden Sidra Saleem. Each class starts with the basics of learning how to achieve balance on a bicycle. Once this has been achieved, they are taught the basics of ABC: Acceleration, Brake and Clutch, using actual motorcycles. In addition to informing the trainees about traffic rules and the basics of driving, says Saleem, the women are also taught how to overcome common problems encountered by motorcyclists.

END_OF_DOCUMENT_TOKEN_TO_BE_REPLACED 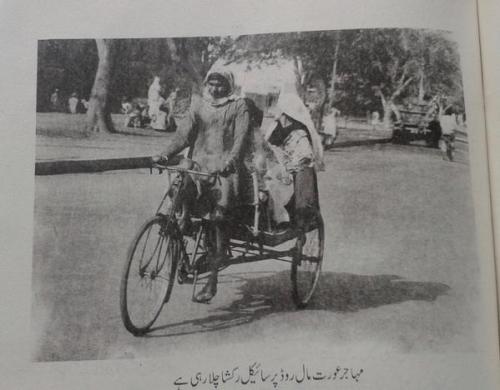 Via Musharraf A. Farooqi

‘Women as health-conscious as men’

* Women from all walks of life joining fitness centres

LAHORE: Women are apparently as health conscious as men, as gyms and health centres for females seem to be packed, revealed a survey conducted by Daily Times.

As the importance to look physically fit escalates in society, particularly in the case of women, joining a gym is gaining popularity amongst them.

Gyms are very crowded in the morning, which is considered to be a peak time for exercise. Women, especially from the elite classes, are now giving so much importance to their health, that they are ready to join gyms despite busy schedules.
END_OF_DOCUMENT_TOKEN_TO_BE_REPLACED

LAHORE: Female legislators of treasury and opposition made sarcastic comments against each other in the Punjab Assembly’s fourth session on Friday. Punjab Assembly Speaker Rana Muhammad Iqbal also amused the members with some funny remarks. Pakistan Muslim League–Nawaz (PML-N) legislator Tayyeba Zameer stood up and tried to say something but was prevented from doing so by female PML-Q members Amna Ulfat, Amina Jehangir and Samina Khawar Hayat. Tayyeba became infuriated and said, “The opposition’s female members have no etiquette. They are behaving like Mohalla women.” To this, Samina replied: “You (Tayyeba) too are ill-mannered. If we are Mohalla women, you too are not from a mehal (palace).” Also during Friday’s session, a PML-Q member asked Irrigation Minister Raja Riaz about the low water level in canals. Riaz stood up and tried to answer the question, but the speaker stopped him by saying, “Did you get my permission to speak?” Riaz sat back down, which made all the members laugh.Pakistan People’s Party member Fouzia Behram said all the female MPAs, whether from the treasury or opposition, should be respected. In response, the speaker said, “All the male MPAs are like your brothers, so they should also be respected.”

Iqbal Hussain from Lahore is one of the finest painters we have. Most of his paintings depict women from the Heera Mandi (literally the diamond market)- or the centuries old red-light district. I found the above image on the Internet today. The news-item referred to Iqbal’s advocacy through his powerful art works:

..Others, who have emerged as spokespersons for the women of Heera Mandi, including leading artist Iqbal Hussain, whose own mother was a sex worker, emphasise their “lack of empowerment, exploitation and helplessness”.

His works convey all of these emotions and bring to life extraordinary characters who are often neglected or spurned by the hypocritical culture of Pakistan.

Being termed a controversial painter in Pakistan, Iqbal’s subjects sometimes tend to shock “puritan painters”, but Iqbal follows his own visions and continues to paint his unconventional and radically innovative paintings. He enjoys a great reputation as an artist in the international art world. His paintings have been requested by Jordanian Princess Wijdan Ali for the Jordanian Gallery of Fine Arts. His were the only ones selected for Unesco Headquarters Prize in 1995, Paris. In 1998, one of his paintings was auctioned at the Sotheby’s Auction House in London.