To all the readers and friends of Lahore Nama, Eid Mubarak.
May this Eid bring peace, prosperity and happiness to all of you and above all Pakistan.
Here is some photos of Rainy Eid in Lahore from Social Media.

Maria Memon says “Spotted in Model Town Lahore : Spare a thought for all these wardens/ police jawans who didn’t get a day off on Eid. “

LAHORE, Pakistan (Reuters) – Gunmen attacked police offices in the Pakistani city of Lahore on Thursday and a car bomb exploded outside another in the northwest, killing at least 15 people after a week of violence in which more than 100 people died. END_OF_DOCUMENT_TOKEN_TO_BE_REPLACED

The assault on security force buildings in Lahore that left 27 people dead and more than 250 hurt was carried out by gunmen who fired at police before their explosives-laden van detonated.

Reporting from Lahore, Pakistan — Officers guarding Pakistani police and intelligence agencies saw the gunmen jump out of the white van that had stopped at their gate. END_OF_DOCUMENT_TOKEN_TO_BE_REPLACED

Posted on May 27, 2009 by Raza Rumi | 1 comment
It was the third attack in three months in or near Lahore, the capital of Punjab, Pakistan’s most populous province. The bomb left a crater eight feet deep and a vista of flattened concrete and destruction. Dozens of vehicles were crumpled like paper and broken glass filled the street. The dark pink brick building of the Rescue 15 ambulance service collapsed and emergency workers dug through the debris to try to find survivors.

END_OF_DOCUMENT_TOKEN_TO_BE_REPLACED

No change in police culture

The Investigation Wing of Lahore police is using ‘conservative’ methods of interrogating ‘criminals’ despite the government’s tall claims of reforming the department.

A weekly review of the performance of Investigation Wing of Lahore Police reveals that it has absolutely failed to provide relief to robbery victims. In a rare example, however, police recovered booty and arrested dacoits within one month. Majority of cases are pending with the investigation police for many years and victims had become tired of paying ‘fees’ to investigation officers (IOs) which sometimes exceed the victim’s actual losses. END_OF_DOCUMENT_TOKEN_TO_BE_REPLACED

[reportedly] 27 dead and dozens injured – no respite for us.

Once again, in less than a month Lahore has been ravaged by terrorists. Who said that Pakistan was a hub of terrorism – we are now the greatest victim of terror and militancy. The residents of Lahore are scared and the vibrant city seems to be enveloped in a mist of uncertainty and fear.

The Mumbai and later Lahore 3/3 model seems to be in vogue now. Extremely well trained commandos, with sophisticated weapons  and not afraid of death are let loose on the society. The media is hysterical as well and following the Indian media’s cue[s] is now a participant and embedded in the so-called operation. END_OF_DOCUMENT_TOKEN_TO_BE_REPLACED

LAHORE: The social audit of the Punjab police, which is generally conducted by a third party, has not been able to properly asses or justify the bulk of the non-development budget being provided since July 2006 to end the shabby thana culture of police stations, an official told Daily Times.

Thana culture refers to the general impression that the public has about thanas and police officials that are found there. In July 2006, the former chief minister of Punjab conducted a social audit of all police stations after various reforms had been introduced, the official, requesting anonymity, said. He added that community policing, waiting rooms, duty officers, extra allowances for sub-ordinates, shift system and the provision of new weapons and vehicles at all police stations had been implemented. END_OF_DOCUMENT_TOKEN_TO_BE_REPLACED 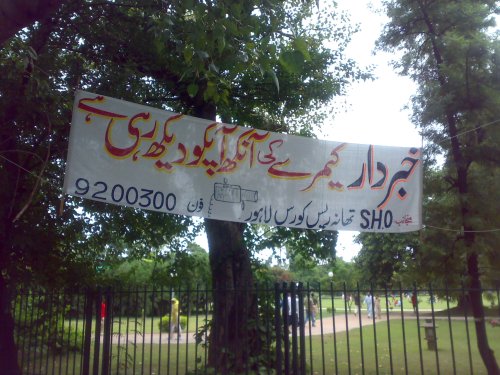 Race Course Park, next to the gate on Golf Road

This little news item encapsulates a world of forbidden pleasures, sleaze, official hypocrisy and the appreciation that the Police gets when crime and lawlessness require a shift in priorities. Who can ever run a brothel and sell consumer sex without Police information and tacit approval in the first place??

LAHORE: Green Town Police raided a brothel-cum-dance club and arrested five people including a girl. They also recovered 4,000 bottles of foreign liquor and an illegal weapon. The arrested were identified as Zubair, Irshad Kamal, Sheraz, Rashid Butt and Iram. The place’s owner, Aysha of 69/B- PCSIR Colony and her four accomplices fled. Rashid Butt had told the police that Aysha used to supply foreign liquor to residents of affluent localities of Lahore and Islamabad and the consignment seized by the police was about to be sent to Islamabad. He further told the police that some of the liquor had been stored in Punjab Society, in the limits of Sattukatla Police Station. Police raided the said place and recovered 4,000 bottles of liquor. The senior superintendent of police has announced cash prizes and appreciation certificates for the police team. staff report