By Haroon Khalid
The South Asian culture is rich because of its various hues and diversities that characterize its idiosyncrasy. Bright colors, rituals and superstitions for practically every action, and numerous festivals all give a distinct flavor to the South Asian life. There is a saying that in Pre-Partition Lahore there were 30 days in a month and 31 festivals. Most of these rituals and practices are not as obvious as they were a few decades ago, however if one is willing to dig beneath the surface and explore the rich heritage of Pakistan’s unexplored rural and sub-urban life, one would end up unearthing celebrations that would leave one surprised and asking for more.

The annual festival to mark the urs celebration of Syed Akbar Ali Shah at a small village near the historical city of Chunian is one such tale of the fascinating life in India and Pakistan. The Saint had 4 sons viz. Khwaja Abdul Aziz Mast, Ghulam Mustafa, Muhammad Ashraf and Khalil Ahmad. Khwaja Abdul Aziz Mast was the eldest of them all and the heir of the Sainthood (Kadi Nasheen). He was a colorful character, who gave a unique blend to his father’s annual urs. He started calling eunuchs each year to take part in the festivities. He would treat them with a lot of love, an act which no one else was willing to extend to them, not even his own brothers. He would say that those whom no one loves, I would, which also endeared him to the eunuchs. Every year they would come to the 9 day and night celebration of the urs, dance and sing all night, collect money from their adorers and sleep all day. His brothers, in particular, Ghulam Mustafa, was more puritanical in his approach and condemned the ‘disrespect’, these eunuchs brought to the final resting place of his father. He gave his brother an ultimatum to end this ‘un-Islamic’ act. Baba Mast, as Khwaja Abdul Aziz Mast is popularly known was a man of love, who did not want to hurt anyone’s feelings. He left the spot, where the Kadi Nasheen used to sit, and moved a few kilometers towards the Chunian city, next to the Balloki canal. The eunuchs also accompanied them. Gradually the pomp and splendor of the tomb also shifted to where Baba Mast had established himself, so much so that after a little while, his brother was left with no other option but to call Baba Mast back.

According to Mushtaq Hussain, the current Kadi Nasheen of the Mazaar Baba Mast died on the 5th of January 1995. Even today, throughout the year, eunuchs from all over the country come to pay homage to the man; they believe was the first person to extend a hand of love towards them. During the urs celebration which are in between 5 and 13 Kante, towards the end of the month of October, eunuchs in large numbers come to take part in the celebration. An act of kindness had such an impact on their psyche that even those who never were able to meet him, come here to reciprocate their emotions.  This year it was being celebrated in between 21st to 30th October. This is one of the largest congregations of the eunuchs in Pakistan. We were told by Mushtaq Ahmad that this year there were more than 2000 of them present.

Kashi, an eunuch in his 40s was a dancer in one of the many camps that they had occupied in the open fields next to the tomb. He told us that he had been coming here for 18 years now. He said that whereas they perform all over the country, in various festivals, the respect that they get from here can be compared to no other location. They are Badmash here. Outside people humiliate them, slap them, beat them, force them to do things they don’t want to, here they roam around as Kings. His teacher Muhammad Yasir, aka Noori 36 years of age, is no longer a dancer but manager. With a thick pile of cash in his hands, he tells us that eunuchs are infamous for their ‘immoral’ activities, but here no such trade or action is allowed. Not even the police harass them here. Most of these people are disowned by their families, some of them are even beaten to conform to a gender stereotype, however not many are kind to them, Baba Mast was one of them who accepted them as they were, says Yasir. Here they are known as Babe ki chidyan.

Young men and old like come from neighboring villages and cities to watch the eunuchs in action, some dancing on the blasting loudspeakers, whereas others on live music. A few also indulge in singing themselves. In the courtyard in front of the grave of Baba Mast a few of them perform the dhamal. Sweatmeat, cigarette, pan and stalls for all sorts of other Sufi stuff remain upon all night catering to the needs of the visitors. Devotees of the Saint come from as far as Lahore to prepare the Langar at the festival. Two vital things at the Langar are chatna and kawa. People gather around the fire to have these two specialties of the Baba, and it is rude to turn it down if offered. They are believed to have healing powers.

Where ever there are eunuchs and young boys, some sort of disorder is expected. This is controlled by the guards, heavily built, in their traditional clothes of dhoti and pakdi, they circle around the festival in a group, carrying thick, colorful bamboo sticks. Same colored bamboo sticks are used all around for the setting up of the camps for the eunuchs.

Towards the entrance one would notice a large number of ducks. These are known as Babe ki batakhein. It is said that Baba Mast had a couple of ducks with him. After his death they multiplied and now run into several hundreds. People also come to them with their mantas serving them eateries that they bring for them.

This is a fairly popular festival as far as the eunuchs are concerned. I asked almost every eunuch that I saw at the Kalma Chowk or the Liberty Chowk, if they would be going to Chunian for the mela. Most of them responded in positive and even those, who were not, had friends who were.

Over the years the number of attendees at the festival is reducing sharply, due to the declining security in the country. Baba Mast had predicted that this festival would continue till the Day of Judgment, a prophecy which the organizers and the eunuchs are determined to make true. However given the present circumstances, one can only hope that what the Baba said should turn out to be true. For now it would continue because of its exclusivity in being of small scale and obscure function, and one wishes that it keeps its subaltern status for its own preservation. 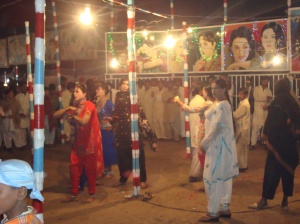 One response to “Babe ki chidyian”